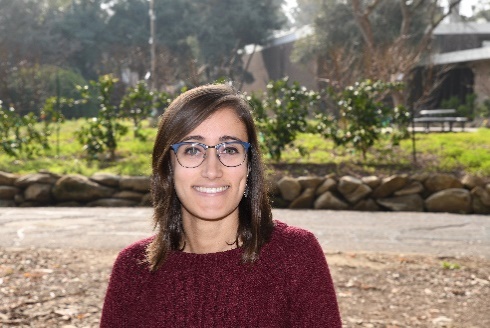 Brown rot is the most economically important disease of stone fruit worldwide. Monilinia laxa is the main responsible of this pathology in Europe and can infect fruit at any growth stage. The disease cycle is mainly triggered when both favourable host and environmental factors occur on fruit surfaces. Herein, we evaluated the infection course caused by artificial M. laxa inoculations on immature and mature fruit of nectarine (cv Venus), which resulted to be resistant and susceptible to the pathogen, respectively. Then, we performed a comparative transcriptomic analysis of infected tissue and control samples. We observed that in nectarine, principal component analysis distributed samples according to their developmental stage and infection status. Functional enrichments analysis for KEGG terms revealed that immature fruit responded later if compared to mature fruit, which were enriched since early time points. In this analysis, terpenoids, which are known to be implicated in abiotic and biotic stress responses, were found to be highly enriched in the resistant immature than susceptible mature tissue. To further decipher the different pattern of terpenoids in both tissues during M. laxa interaction, we analyzed some terpenoid biosynthetic genes in two nectarine varieties (cv Venus and cv Albared). While in “Venus” nectarines, the infection only progressed on mature fruit, M. laxa was able to infect and spread the disease in both immature and mature “Albared” tissues. Gene expression analysis of terpenoid biosynthetic pathway in these tissues revealed impaired expression patterns between maturity stages and varieties. Such altered regulation could ultimately explain the different susceptibility to brown rot of the two varieties. Hence, the results presented herein provide insight on terpenoid biosynthesis and may contribute to the current search for resistant cultivars of stone fruit. Accordingly, an in depth inspection of volatile compounds analyzed on both tissues of the two varieties elucidated an altered production pattern, demonstrating the importance of specific compounds when counteracting the pathogen. Overall, these results shed light on plant resistance strategies, which we believe that are key targets to consider when developing new resistant cultivars of stone fruit to brown rot.

PhD student Marta Balsells-Llauradó studied Bachelor’s Degree of Biotechnology at the University of Barcelona, Spain (2014). She then studied the Master of Science in Plant Biology and Biotechnology at the Universitat Autonoma de Barcelona, Spain (2015). Since 2016, she joined the Postharvest program at IRTA-Fruitcentre (Lleida, Spain) as a Laboratory Technician, from where she participated in two research articles SCI. Since 2017, she started her PhD thesis at the same institution. She has performed two abroad stays, in Antwerp, Belgium (2014) and Davis, California (2019).