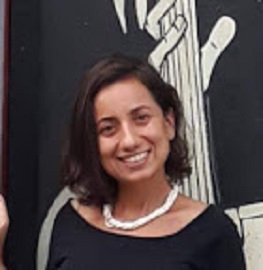 Title : Crops and people: re-signifying maize from the lowlands of South America

In my presentation I will address the relationship between socio-cultural diversity and genetic diversity, understanding how the former generates patterns of variability and ensures the conservation of the latter. To do so, I will base my research on the "Lowland Maize Races in South America: Updating the Diversity of Local Varieties in Brazil and Uruguay", which aimed to map and identify the diversity of maize currently conserved in this region of the American continent, demonstrating the importance of farmers and the region for the evolution and diversification of the species. I will also address the methodology constructed within the scope of the research to challenge the following questions: What is the current maize diversity in the lowlands of South America? What changes occurred in this diversity after 40 years of the first baselines of species diversity in both countries. Are there geographical areas that can be considered micro-centers of diversity? That is, to know what is being conserved, where, how and by whom generates a frame of reference for the conservation of the genetic resources of a country. This information will allow the identification of micro-diversity centers as a mechanism for the protection of local varieties and, consequently, identify priority areas for in situ on-farm conservation and make possible the elaboration of a shared management proposal of the collected germplasm. The presentation will have the following purpose: to recover the history, the socio-cultural aspects of the diversity of a species cultivated in the territory of the Lowlands of South America together with the work of different organizations related to family agriculture, re-signifying this germplasm and valorizing the farmers involved in its conservation. The results of the research will be connected with the historical aspects of maize evolution and domestication, its dispersion through human migrations and the diversification of the species in different breeds and local varieties. Complementing with a review of scientific studies of different areas of knowledge, such as anthropology, archeology, linguistics and genetics, I will answer the following questions: where, how and when was maize domesticated? And how it dispersed to the Lowlands of South America.

Dra. Natalia studied Agronomy at the UFMG, Brazil and graduated as MS in Agroecology in 2011 at the same institution. She received her PhD degree in Plant Genetic Resources in 2015 at the UFSC, Brazil, with a sandwich period at the CIMMYT, Mexico. Postdoctoral fellowship at the Plant Ecological Genetics Laboratory, ESALQ/USP, Brazil. She is currently a lecturer at Tecnology University, Uruguay, and a founding member of the Interdisciplinary Group on Agrobiodiversity Studies (InterABio). Her research areas are agrobiodiversity and agroecology, plant evolution, collection, characterization and conservation of plant genetic resources.